Over a year of CrossFit and today I had my first DNF – Did Not FINISH! I may have dragged ass but I have always finished. But in the end it’s better than a DID NOT START! And I did start off good this morning with the the Skill/Strength but for the MetCon I just didn’t have it in me; maybe it’s the sugar detox; maybe I’m not eating enough foods; maybe it’s the sadness of the Texas Rangers blowing the AL West Division title; I just don’t know what happened this morning. 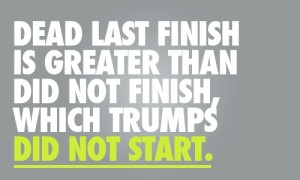 Skill/Strength: 4 x 6 Floor Press @ 65lbs, 3 rounds of max Ring Dips
Floor Press felt good today. By the 4th round it was a struggle to get the last few reps in but I completed them without fail. It’s always a relief when you don’t get a fail! The 3 rounds of Ring Dips are not as fun as Floor Press. My shoulders are tight, my hands start hurting, I just turn into a mess. With the green band I only pushed out 10, 8 and 8. I don’t hold that in “good” standards, just bleh. Coach then had me drop the band and use a bench for my feet. I tried like 3 times and I had NOTHING. I took a few minutes to rest and then finally got a count of 3. That’s not a lot I know but after feeling helpless with a count of 0, I’ll take 3.

MetCon: 10 rounds of 200m Sprint Jog, 6 Pistols, 3 Handstand Push Ups, 22 min time cap. Sigh. I was done after I only READ 10 rounds and 200m Sprint. But I pretended I wasn’t and took off. It took me a whole minute to run that 200m. I’m thinking that’s pretty slow. And the rounds to follow only got slower.

When it comes to Pistols please note I did modify them by using a box to stand on and also note I have no confidence in my left leg due to my IT band and the pain it induces when I hit a certain degree of bend in my knee. I still manage to bare down and get it down, it’s just not pretty. Shoot, my right leg pistol isn’t pretty either but at least I can get better depth. After a few runs, I basically just stood on the box to catch my breath…. wasting time. Then more time wasted getting situated doing modified HSPU. I learned a few rounds in that I wasn’t doing HSPU exactly right and had to change it up. I struggled at first but finally came to terms with feeling better at doing it right. The runs just killed me. We had a time cap of 22 minutes. I finished my 8th round right around 21 minutes, I had to run still although I really just wanted to stop. By this last run, I had a side stitch, I didn’t want to run, I barely did at most points and even deferred to walking. How’s that for a DNF?!? BOOOOO.

The 21-Day Sugar Detox – Day 3 & 4
I was much better for the rest of yesterday. Last night after one of my kiddos football game, I had to go up to the school to pick him up. While waiting I know that I don’t really have much to prepare for dinner. There was meatloaf leftovers for my other kids but I couldn’t have any because there is honey in the sauce. I didn’t have the energy to cook anything so as I sat there waiting for my kid to get out I decided I would just go to Boston Market. So I did and I got their Mediterranean Salad, no cheese, no dressing. It’s a simple salad with tomatoes, cucumber, onion and rotisserie chicken. They gave me a fair amount of chicken which is nice but I really was hoping for a more hearty salad. It did the job though and filled my belly. Today for breakfast I went with a small serving of acorn squash (yummy) and 2 eggs, and for lunch I have chicken, kale and spinach salad. Probably more chicken for dinner with some veggies. I also have eggs and bacon for a snack. I still want something bad. It’s not even that I want something really bad. I just want a nectarine. Or some strawberries. Or a brownie!  I’m being strong though, fighting through and hoping this lack of energy will disappear and I’ll be back to my normal achy feeling self! I gotta start planning tonight what I’m going to eat tomorrow. We’ll be at the Wild Card game that the Rangers are playing in. And if it’s as stressful as yesterdays game I’m gonna need to be food prepared so I don’t drown my stress in hot dogs and nachos!

It’s so close to the weekend! Peace out! Be AweSOme!