I definitely did not get enough sleep last night. Stayed up too late and had a hard time waking my sleepy head up. Alas, I did wake up and hauled my butt to the BOOM Box. I better get to bed soon tonight because I have my 5th WOD for the week in the A.M. This is my first full week at the new scheduling. It’s not that I have never shown up more than 4 times a week. But typically the 5th day would be a community work out and more group/fun based. I’m not saying we didn’t put in work but it was a different atmosphere. Granted I won’t be able to tell much after one week, but I can at least gauge how I feel as the weeks build upon each other.

Skill/Strength: 2RM Press
My shoulders have been plaguing me. Mostly I believe because I sleep on my sides and I don’t do enough mobility. So this morning I really had to stretch out and warm up for any part of my shoulders to feel good. As I warmed up I was feeling good at 65lbs. Did 2 reps no problem. 70lbs is my 1RM and I’ve been stuck here for quite some time. Today I made a tiny dent by getting 2 reps at 70lbs. In my excitement I jumped up a WHOPPING 5lbs and it was a fail! I should just be happy I had more than 1 rep at 70lbs! I guess 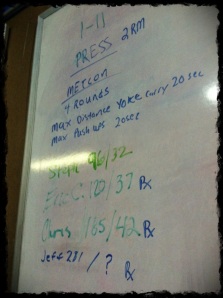 MetCon: 4 rounds of MAX YOKE CARRY for 20 seconds, MAX PUSH UPS for 20 seconds
I’ve been calling the YOKE that EVIL SLED, EVIL PROWLER, but in the end it’s a YOKE. A 185lb one at that! The ladies were supposed to put 25lb plates on each corner for this MetCon. I however dropped to 10lb plates. The reasoning behind this is that I picked up the yoke and it was way low to ground and I did not feel confident. So 10lb plates it is. And I also had the bar lowered to get a little more air between the ground. After the bar was lowered I realized it was a little easier and 25lb plates would have been feasible, but this was after I started. No time to change it now

A little disappointed knowing I would have been fine at a higher weight. Ah well. 20 seconds doesn’t seem like a lot but it does add up. I did fine until the 3rd round. I think my core had had enough between Push Ups and carrying the Yoke. I dragged on Push Ups which wasn’t good at all. I ended up carrying the Yoke 96yds and completing 32 Push Ups. It was mentioned we will do something similar soon so mentally I will be ready!

Pulled Pork ended up being FABULOUS. My lunch yesterday made me a happy camper! For dinner I went with my old fallback of Spaghetti Squash and Pasta Sauce with GrassFed Ground Beef! This time around, since my squash had been sitting in fridge, I sauteed the squash in GHEE with some garlic and shallots. This was very nice flavor profile when combined with the meat sauce. Added some roasted broccoli to the mix and dinner is served! I did end up eating some fruit after all, 6 cherries. 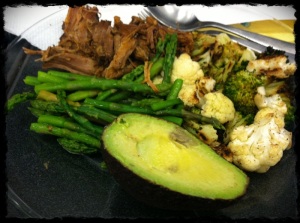 Day 10, 20 to goSmooth sailing from here I hope. It’s hasn’t been all that bad in the first place as long as I’m prepped. And since I don’t want to fail I have made sure I have defrosted protein and at least one veggie that is easy to cook. This morning I didn’t feel like I exerted my self the same as earlier in the week so I only had one Hardboiled Egg with some Sweet Potatoes for my Post Workout Meal. For breakfast I had some Pork Belly, Kale Chips, TBS of Sunbutter, and I heated up some more Sweet Potato and an Egg Muffin. This is all very easy to eat on my commute to work. Whew. Lunch will be more leftovers of Steak, Broccoli and Cauli Rice. 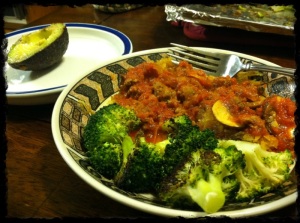 Dinner is TBD as it typically is, I have some Pulled Pork left as well as Pasta/Meat Sauce and plenty of veggies so that will probably be the plan. Like I have previously mentioned, it does get old and routine. I don’t have time to hit up the grocery store daily and my meals tend to have that Wash, Rinse, Repeat rhythm but at least it all tastes good and I’m hitting the mark.

Mood: Overall my BRAIN is clear, my EYES are bright, and I’m just in a good place. Today I’m dragging a lil bit but I know that’s due to not enough sleep.

Have a fabulous weekend. Hopefully there won’t be torture waiting for me at the BOOM Box tomorrow morning!! Other than that Be AWESOME and all that Jazz. 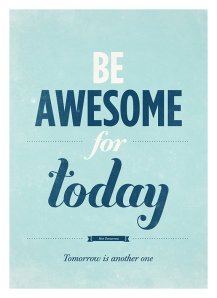