For those of you new to CrossFit, GRACE, is a workout. 30 Clean and Jerks for time. A simple but challenging benchmark workout that will beat you down but only for a short period. This morning was GRACE for us at the Boom Box. Not what I was really feeling for my not so graceful return to the 5 a.m class, ON A FRIDAY. I was sleepy, groggy and just overall bleh, but I was still THERE! 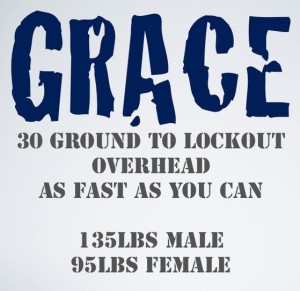 As Prescribed is the weight that the CrossFit Powers that be think is ideal to test yourself and to retest yourself over and over again. Hence, benchmark WOD. And for the females 95lbs is the prescribed weight. Someone like me does not just pick up a 95lb bar and go. In the early days, I started at a lower weight and hoped to survive. As I got stronger, the weight went up. Today was the first day I was going as PRESCRIBED or RX as us veterans would say. And for NO reason at all I was nervous. I wanted a good time for sure but I was still just dragging ass. Hello, it’s Friday, 5 a.m., my first week back to early mornings. I wanted/needed sleep. If there was an option to just walk out the door I would have picked that option. 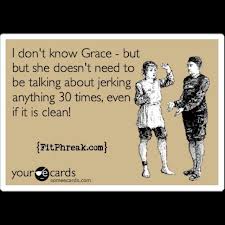 Last October I did Grace for Barbells for Boobs, which by the way I plan to do again (hint, hint, I will be begging for donations) this October. I went with no fuel. I had not eaten all day, walked in late, barely warmed up and went. For some reason I had it in my head I went RX last year but turns out I only went at 85lbs. I was miserable but I was under pressure to do well. It wasn’t a competition but it was a little more intense than 5 a.m Friday morning. I was so nervous this morning my stomach was starting to hurt. We got the 10 second countdown and it was time to perform. I wanted to do sets of 5, my 1RM is either 105 or 110 or 115, but I’m not really sure. 95 has become NOT HARD, but still not easy for me. This morning my biggest struggle was holding onto the bar. My shoulders were not liking me very much. So I went for 3 reps and dropped the bar. Picked it back up and on my 6th rep, I about knocked myself out as I hit my chin on the way up for the Jerk. Brought the bar back to a rack position. Stood there dazed and pissed and finished that 6th rep only to drop the bar. I made it to 9 reps doing sets of 3. This was not boding well for me. I dropped to sets of 2. But by rep 16 I was only doing 1 at a time. But guess what? This felt so much better on my shoulders and as long as I didn’t stand around staring at the wall I was going to be alright. The holding onto the bar coming back down to the ground was just not working for me today. Time: 7:03. To be honest I did it last year at 85lbs in 6:06. But I was also in better mental and physical shape. But I was still hoping to beat that time even though I went 10lbs heavier weight and I’m much more back to a starting over phase. So you know I have to have the goal that come October I will BEAT that time. And hopefully, B4B won’t be before the sun comes up 😀

Other than that we did front squats but that’s so boring! Heheh. 4 sets of 5 at 65% of our 1RM. Lucky number 95lbs! Wooo, it was just in the cards for me to work at this weight today.

In other news, I had friend come watch this morning to see if CrossFit is something that is for her. She’s scared of bulking up, which most of you reading SHOULD KNOW that’s not just going to happen. Like anyone, she has and idea of where she wants to be and of course she has a timeframe. And as most of you know I HEART the CROSSFIT and I tell everyone all the time that I do, but I have a hard time convincing people to try it out. It’s a lose/lose for me sometimes. Why? Because I’m not some super ripped amazeballs looking human. I’m average, chunky, and a goofball. So what’s the problem? Well if I was super ripped amazeballs, everyone would be intimated and not come cause they would think they would have to look like me to do it. The truth is I’m an above average OOMPA LOOMPA and people probably think … “it’s not working for this girl!” So basically I’m screwed.

At one point I was lean and was getting some definition and probably more able to convince people to try it out but today not so much. So I ask you readers, how do you get people to at least come and check it out. My friend at least made the commitment to show up at 5 a.m. to watch so that’s a start! Most people laugh at my 5 a.m. check-ins on Facebook… yes I’m that annoying person, checking in all the time! She’s still not convinced it’s for her and it may not be. And watching people throw barbells over their head is probably pretty scary. But we do other things too, that are less miserable, it’s so hard to say how it will be fun in the end and the people are awesome and to come back and give it a try and not just be on the sidelines spectating. I did get her to semi-commit to coming out tomorrow for a Community WOD. So that’s step 2. What advice do you give people to come check out CrossFit and convince them it’s not going to kill them or make them into SHE-MEN?

And that’s all I got for this fantastic Friday! And I can tell you that I’m feeling that 2nd definition of GRACE, the favor of GOD. Feeling really blessed today in family and in fitness. Hope you all have a great day and weekend. It’s Friday! Be the most AWESOME you can be.

8 thoughts on “GRACE as Prescribed”