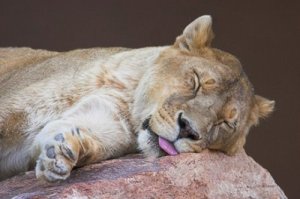 Thursday is for REST!

Heheh, I couldn’t think of a “good” title so I quoted one of my favorite Christmas movies! Happy Thursday! Christmas is really almost here – FOR REAL. Just a few more days and I’m still not ready! Talk about procrastinating. Not one present is wrapped. I’m sure the kids are wondering what the heck, hahaha. Ah well. It’ll be fine when it actually gets here! I’m just a slacker of a mother! They know me well enough to know I wouldn’t let them down on Christmas!!! Thank goodness they aren’t little and thank goodness I never knew about Elf on a Shelf! Geez having one of those would probably have made me lose my mind by now. I’m just happy we are almost done with the Tooth Fairy. She’s a lazy one!

So onto ME cause what’s better than talking about Me? Hahahah, I’m not that self centered. Just on the verge. Hell I started a blog to talk about me, maybe I am that interested in me. Anyways. Moving on! I got my 2nd EARLY Christmas present last night and ooooo weeeeee it’s a good one! A Cuisinart 12 cup Food Processor! Ya Buddy! It comes with a 4 cup bowl too! I’ve been using this itty bitty chopper/grinder to get my stuff chopped and cut up with and it was good because it helped but it’s so small I could only do a little bit at a time. I have a family of 5 to cook for and all boys so you can only imagine how little it helped! NOW I have the deluxe model that will process ANYTHING and in large amounts! It can’t get any better than that 🙂 But wait there’s MORE … now Ernie says he’ll be able to help me with dinner! WTH? That’s what the processor is for…to help me expedite the chopping and the mincing and the shredding of foods. And NOW he wants to help! I was like sooooo helping before was not an option? And now you’re ready to jump on board?!? Hahahha. Seriously…He’s great when it comes to the grill, so this isn’t Ernie bashing day. He did get me my new prize after all but I find it rather funny that he now wants to help with dinner. MEN!?!

So now hopefully I’ll be making my own nut butters, nut flours, and anything else I can get done with my beast of a machine. Or maybe it will be Ernie figuring it all out! I’ll keep you posted on how long his enthusiasm lasts 🙂

Thursday = REST DAY (at least it’s become that way lately)
No workout today but I did finish my cakeball frenzy… THANK GOODNESS! Here is the last of them – Chocoloate Mint, Butter Cake, Red Velvet and Brownie! I do have a mini frenzy scheduled for this weekend but it will only be a fraction of the 600 I made this week! 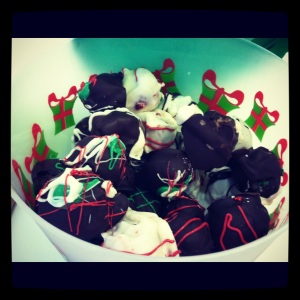 Yummy! One day I will take pretty pictures.... ONE DAY!

So this past weekend was a hectic whirlwind of STUFF. Got my two workouts in Saturday Morning. First stop iChooseFit at 7 am. We had a nice beatdown. Great start to get my blood going. I go home, put on dry clothes, eat something and head out with Ernie to the Saturday Funday WOD at the BOOM Box. And boy was it was it a doozy!. TEAM WODs!!! – which can be good or bad depending on how you look at it. Lucky for me I had Tristan, 15 yr old beast of kid who loves to CrossFit! Sadly for Tristan he had me! Hahahha, I’m not so bad but pullups were part of the workout and I SUCK at those. Fortunately we were a good team. The WOD was a chipper …. woohooo fun. For those of you who don’t know it’s where you take movements and do a shit ton of them till you want to puke… ok well there is more to it but that’s how I personally feel about chippers. It’s where you start with high reps and work your way down in reps. So ours was 150 Box Jumps, 125 KB Swings, 100 HR pushups, 75 pullups, and 50 Weighted Overhead Lunges. We knocked it out in a mere 19 minutes and 2 seconds. 1st place baby!!!! It was a killer of a workout. And again, not dead, still living.

After we showered and got some fuel in our bellies, it was time to load up and head out to a casting call for a reality adventure show… ESCAPE ROUTES! 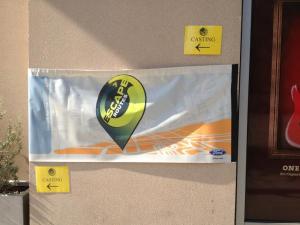 We had a quick interview, got the kids some free tees! Thanks @CastingMalley and @CastingRane! And…… we got a callback! Woohoo, Go US! Except we were kind of lackluster at our callback and it felt like a bad date. I don’t think we were really “us” and we seemed kind of boring (from the outside looking in). And if you know us… YOU KNOW WE ARE SOOOOO NOT BORING! So hopefully fingers, toes and everything else crossed, we weren’t too boring and maybe our applications were entertaining enough to get us on through to whatever the NEXT round may be. We’ll see.

After running around all afternoon like crazy people we finally wrangle ourselves back home and the cake baking begins for my annual CAKE BALL FRENZY! It’s not PALEO but I just didn’t have time to figure that one out! It started a few years back as “class” gifts for each kids class and teachers and well now it’s become their tradition. In addition to cakeballs we’d get the teachers gifts and wrap them all up… As the kiddos get older they get more teachers so I began to give them ornaments…The most UNIQUE ones we could find that the kids thought appropriate. And this year I decided to MAKE them.

So below you’ll see some pics of cake balls and ornaments. If you would like more info on either please leave a comment, I’ll get back to you 🙂 And I apologize for the poorly shot ornaments. You just don’t “GET” all there is to them in these photos. They are filled with cuteness and that didn’t translate well with the lighting or my iphone.

Happy Monday and once again Happy 1 Month Bloggiversary to ME! 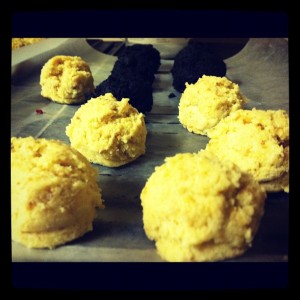 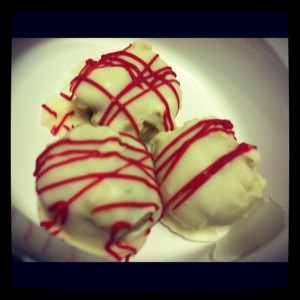 Trying to get a "GOOD" picture... not working 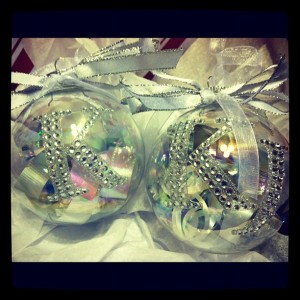 Tried different Filter for this one... Still dark 😦

Before I get to CAKE BALL FAIL… I’ll discuss my workout this morning… then I’ll move on to last nights cookin’!

It was a windchill of 21° this morning as I drove to bootcamp. Thank goodness we have an indoor option! Although we did have a run that included being in the FREEZING COLD – not fun. Come on now, we’re in TEXAS! I’m not made for the cold! As always boxing is my favorite part of the Tuesday workout. We’re always mixing it up and I feel like I’m getting quicker every week. AJ makes sure to keep me on my toes! In addition to boxing we did a 20 minute AMRAP if you will. There were 8 movments where we had to do 25-50 reps of something and then run with a 20 minute time limit. (pushups, bicep curls, alligator plank, burpees, jack knife dead lifts, star jumps, up/down plank, run) I got through 1 round and 4 movements into the second round! Woohoo. I felt good today. I suppose I got some good sleep 🙂

Now for last night…..So my Paleo Cake Balls were an epic FAIL, my kids including myself were sure we would never erase the taste from our mouths. When you get too much unsweetened chocolate in one large ball it’s pretty disgusting! Although they came out just as pretty looking as any NON PALEO cake balls I have ever made. There will be a round 2, I promise, I just have to find a “good” PALEO frosting to mix with my cake crumbles.

So now that’s off my chest and I admitted my failure, lets move on to the goodness that did pan out last night. PALEO PUMPKIN CREAM CHEESE which I took from PaleoOMG blog http://paleohmygoodness.blogspot.com/2011/10/paleo-pumpkin-cream-chicken-casserole.html

It turned out quite tasty and the family seemed to agree. I feel that I liked it best since I scarfed it down or maybe I was just that hungry. 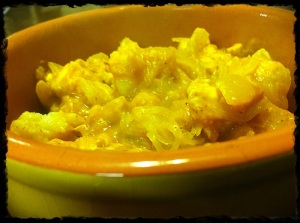 While the squash and cauliflower are cooking, it’s time to cook up your chicken. Pull out either a LARGE saucepan or a large pot and put under medium-high heat.

Add olive oil to it along with your minced garlic. Once the garlic begins to smell, add your chopped onions and cook until translucent.

Add your chopped chicken to the cooking onions, cover and let steam for around 5 minutes.
Once the chicken is about 2/3 cooked through, add your can of pumpkin, half can of coconut milk, and spices directly to the pan. Mix thoroughly. Taste to see if you need any more spices or salt.

Once your squash and cauliflower is done cooking, and chicken saucey mixture is heated up, de-thread spaghetti squash with a fork, running the fork the opposite way of the threads.

Add your spaghetti squash threads, roasted cauliflower, and chicken saucey mixture to a 9×11 glass baking dish and add dish to the oven under the broiler. Cook for about 5 minutes, getting a little dark on the top.

Remove from oven and let sit for around 10 minutes to help the sauce thicken up. Then EAT! It’s good stuff and rather easy to make.

AFTER I had cleaned up dishes and had my cake ball disaster I decided I would get a jump start on tonight’s prepping and got zucchini all sliced up to cook as my “spaghetti”. It’s just prepped and in the fridge for now

But post prep I had some zucchini ideas, ran it past the kiddos and they were on board so we made tiny zucchini sandwiches! This was quickly packed away into containers for their lunches. They were very excited about them and tried out a couple. There’s one for the WIN column. I hope they enjoy them today at lunch. MY 8 year old says the kids at school think what he eats at lunch is GROSS! Then he procedes to tell me “they have no idea what GOOD food is… raspberries are awesome and my sandwiches are going to be good today! They all eat chips and crackers, and sugar stuff. That’s stuff isn’t good for you” He’s a good kid that Jakob. 🙂

So I’ll leave you with a pic of our little zucchini sandwiches. They have all natural, minimally processed, nitrate free ham, carrot slice and of course zucchini. Have a great Tuesday!