You know it. Although my Day THIRTY is not complete, it soon will be! I made it! I am crossing the FINISH LINE!

It wasn’t the smoothest ride but I fared pretty well. I ate compliant foods the whole way and although some of my weekends were a little off on proportions, I still hit this one out of the park. I was mentally prepared for the challenges I knew I would face and by the end of this journey, the temptations and cravings were no more. I know I will not be 100% from here on out but I hope to be 90-95%. I hope to continue with my food prep and staying on task but if I go rogue once a week on dinner, it won’t be the end of my world. I have no plan post Whole30. I just want to be better than I was for a majority of 2013. I don’t think that will be hard because I feel so darn good. I like where I’m at. And I don’t want to go back!

I learned that no matter how good you are at clean eating or how disciplined, there will be pitfalls. I know there will be struggles. I know, because I fell into the abyss around April of 2013 and it took me 9 months to find the light. I’ve learned that if my body and brain feel better then I’m not as harsh on my physical self that I see in the mirror. We are our worst critics and I’m super bad! But when I feel good because I’m eating good, I’m less likely to nitpick at myself. I’ve RE-learned that just because we are busy that I can always make time to get GOOD CLEAN food and I can’t use TIME as an excuse. I’m not saying it’s easy but it’s true.

Whole30 and Beyond
I do plan on trying new Paleo recipes so I will try and share those as I go along. Honey and some pastured dairy are all I really plan to add occasionally back into my kitchen. If I eat anything non-compliant it will because of a social outing. And of course, I’ll let you know when my off-road eating gets the best of me!

I’m here to cheer you on, be your support system, or answer any questions if you choose to do your own Whole30. There are also many supportive folks in the forums at Whole30.com. So don’t be afraid to see what’s going on over there.

CrossFit Boom
As always, I will continue to post my workouts here so that’s never going away! I did end up making it to the Friday morning workout, so yay for that. Then there was the Community WOD and Yoga on Saturday, both of which are fun.

Ain’t no thing but a chicken wing! So even with the wrist not 100% I was still able to hit my 1RM on Snatch. That’s not great since I feel I could do more weight, but I a scaredy cat

As for Squat Clean Thrusters it’s a NO GO. I could clean the bar by itself but to Squat and then do a Thruster was too much. Coach T asked if I wanted to do something funky in regards to Cleaning the weight so I said SURE!  Let’s Clean like Kelly Starrett!

Yay, that was fun! And I can actually do my favorite lift now! I didn’t start out doing the Mixed Grip, which probably would have helped with heavier weight. But I did get to 105lbs which isn’t bad for my first go round at this new Chicken Wing method. Moving on to Back Squat, I feared I wasn’t going to get close to 175lbs which is my 1RM but I managed to hit 165lbs. I’ll take that for now. I know you can’t always max out or hit new PRs. It’s been a hard lesson learned over they years but I finally found my peace with it! Totals: 75, 105, 165 = 345lbs 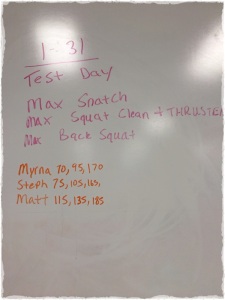 Midline: 30 T2B
Have no fear T2B are still here! Woot Woot! Now if I could just string them together!

MetCon: 4 min AMRAP of 10 HrPU  and 5 Cleans 115/75 rest 3 min then 4 min AMRAP of 10 HrPU and 5 Cleans 115/75
I was so excited to actually be able to do Cleans in a MetCon again! Granted, they will be slower than normal because I can not touch and go with a chicken wing but I can do them! This time, I started off with the Mixed Grip and felt that my hand was less likely to try and revert to a normal Clean movement which was good on the wrist. Since the weight was not heavy I tried to catch the weight at the bottom so I could have a little more fluidity. This only worked half of the time though. Push Ups are what got me. I only got 4 Push Ups in and my wrist felt tight and achy, so I moved back to fist Push Ups. This was no fun and I really dragged ass. Final: 8 rounds RX

That’s a Wrap!
Thank you all in general for being faithful readers. And an Extra BIG Thank You for your support during my Whole30. I would hug you all if I could! Having something to blog about other than my workouts is definitely nice but now that Whole30 is over, I hope you continue to stick around. I’m still planning on getting involved in more giveaways and what not so stay tuned.

Remember it’s not about being perfect, it’s about making progress! Every meal is a new meal, every day is a new day. If I were to pick one thing to eliminate for good that would be WHEAT. I know what it does to my body when I reintroduce it and it’s not good. So just pick one thing to ADD or ELIMINATE from your life for at least 30 days. See if anything changes. Then change something else for the next 30 days. No one said you had to go cold turkey! But it sure is helpful if you do!  Don’t forget Paleo Parents has a handy dandy e-book, 3 Phase Paleo that will help you make the transition. You can find the link to the book in the menu bar, top right!

Have a beautiful Tuesday and Whole30 ON! 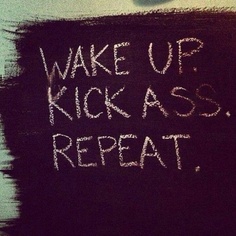 Before I get to CAKE BALL FAIL… I’ll discuss my workout this morning… then I’ll move on to last nights cookin’!

It was a windchill of 21° this morning as I drove to bootcamp. Thank goodness we have an indoor option! Although we did have a run that included being in the FREEZING COLD – not fun. Come on now, we’re in TEXAS! I’m not made for the cold! As always boxing is my favorite part of the Tuesday workout. We’re always mixing it up and I feel like I’m getting quicker every week. AJ makes sure to keep me on my toes! In addition to boxing we did a 20 minute AMRAP if you will. There were 8 movments where we had to do 25-50 reps of something and then run with a 20 minute time limit. (pushups, bicep curls, alligator plank, burpees, jack knife dead lifts, star jumps, up/down plank, run) I got through 1 round and 4 movements into the second round! Woohoo. I felt good today. I suppose I got some good sleep 🙂

Now for last night…..So my Paleo Cake Balls were an epic FAIL, my kids including myself were sure we would never erase the taste from our mouths. When you get too much unsweetened chocolate in one large ball it’s pretty disgusting! Although they came out just as pretty looking as any NON PALEO cake balls I have ever made. There will be a round 2, I promise, I just have to find a “good” PALEO frosting to mix with my cake crumbles.

So now that’s off my chest and I admitted my failure, lets move on to the goodness that did pan out last night. PALEO PUMPKIN CREAM CHEESE which I took from PaleoOMG blog http://paleohmygoodness.blogspot.com/2011/10/paleo-pumpkin-cream-chicken-casserole.html

It turned out quite tasty and the family seemed to agree. I feel that I liked it best since I scarfed it down or maybe I was just that hungry.

While the squash and cauliflower are cooking, it’s time to cook up your chicken. Pull out either a LARGE saucepan or a large pot and put under medium-high heat.

Add olive oil to it along with your minced garlic. Once the garlic begins to smell, add your chopped onions and cook until translucent.

Add your chopped chicken to the cooking onions, cover and let steam for around 5 minutes.
Once the chicken is about 2/3 cooked through, add your can of pumpkin, half can of coconut milk, and spices directly to the pan. Mix thoroughly. Taste to see if you need any more spices or salt.

Once your squash and cauliflower is done cooking, and chicken saucey mixture is heated up, de-thread spaghetti squash with a fork, running the fork the opposite way of the threads.

Add your spaghetti squash threads, roasted cauliflower, and chicken saucey mixture to a 9×11 glass baking dish and add dish to the oven under the broiler. Cook for about 5 minutes, getting a little dark on the top.

Remove from oven and let sit for around 10 minutes to help the sauce thicken up. Then EAT! It’s good stuff and rather easy to make.

AFTER I had cleaned up dishes and had my cake ball disaster I decided I would get a jump start on tonight’s prepping and got zucchini all sliced up to cook as my “spaghetti”. It’s just prepped and in the fridge for now

But post prep I had some zucchini ideas, ran it past the kiddos and they were on board so we made tiny zucchini sandwiches! This was quickly packed away into containers for their lunches. They were very excited about them and tried out a couple. There’s one for the WIN column. I hope they enjoy them today at lunch. MY 8 year old says the kids at school think what he eats at lunch is GROSS! Then he procedes to tell me “they have no idea what GOOD food is… raspberries are awesome and my sandwiches are going to be good today! They all eat chips and crackers, and sugar stuff. That’s stuff isn’t good for you” He’s a good kid that Jakob. 🙂

So I’ll leave you with a pic of our little zucchini sandwiches. They have all natural, minimally processed, nitrate free ham, carrot slice and of course zucchini. Have a great Tuesday!