Slightly inspired by the video (below) I watched this morning, I decided to talk about WHY I CrossFit and why after 2 years it’s still something I want to do pretty much FOREVER. Not to mention that there are articles popping up left and right on steps to begin CrossFitting or the do’s and don’ts of CrossFit or why you SHOULDN’T CrossFit.

I watch this sport exploding yet there are still so many folks out there who don’t have a clue what it’s about. I’ve seen the positive reports and the negative reports. I’ve seen people show up for a workout and are never to be seen again. I won’t say I’ve seen it all because I’m just a busy mom living in her small part of the world. But I will say CrossFit can be for everyone. 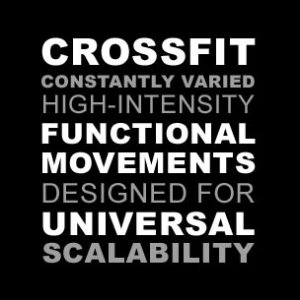 I don’t remember all of the details of my first workout mostly because it was about 2 years ago, but I went to a free CrossFit Boom Community WOD with Ernie (who had been going for a couple of weeks already). We did Kettle Bell Swings and Thrusters for 21-15-9. I don’t recall if we had a time cap or what but I remember it kicking my butt! I had no idea what a Thruster was. I had no idea what going below parallel was. I just knew it was kicking my butt and here I thought I was in pretty good shape. I also knew from that moment on I wanted to swing kettle bells and lift barbells. I had no idea what was in store for me but I was ready to take it on. 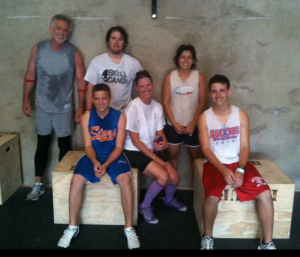 The following weeks were all about learning how to properly lift weights and properly do a whole bunch of other movements! Mechanics, mechanics, mechanics! I didn’t know then but I do know now that not all Boxes (term for the CrossFit Gym) are created equal but I felt fairly confident my Coach had his head on straight and was there for the love of CrossFit. He was educated, he was eager and he taught us well. He was there to make sure we did things properly to avoid unnecessary injuries. He was there to make sure we were having fun. As for me I was seeing improvements, I was seeing myself get stronger and yes I was having fun. I was ready to take on the world. So much that I eagerly signed up for a charity event called Barbells for Boobs and even more so that I signed up for a competition only 3 months into my CrossFit Journey.

It was at Barbells for Boobs that I first witnessed the awesomeness of the CrossFit COMMUNITY! All of these folks coming to workout to raise money and awareness for Breast Cancer. The workout was “Grace” – 30 Ground to Overhead for time. I was so nervous. I had never worked out in a situation like this. And boy did it suck. But the whole time it was sucking, so many people were standing around cheering me on. But not just me, EVERYONE! It was so rewarding to finish and to watch all the other heats start and finish. I saw the fittest of fit, finishing in insane times, I saw the newbies such as myself just trying to push through. I saw young, old and everything in between. And that was just the beginning. From competitions to visiting other Boxes in different cities – CrossFit is a Community that can not truly be explained until it’s been experienced. It’s a supportive community that shares the same success and failures as you do. We all experience the same highs and lows. We all see that we have similar strengths and weaknesses. It doesn’t matter at what stage in life you start CrossFit, we all share the same insanity.

And two years later I STILL love to live in the CrossFit world. There are ups and downs but I’ve never been bored or plateaued. I’ve been lazy and tired but that hasn’t stopped me. I’ve watched extremely fit people come in and just kill it and I’ve seen first timers have that look of defeat in their faces. No matter what level of fitness they are at they keep coming back. All for different reasons, of course, but they keep coming back. For me there was a small pipe dream that I would become some super athlete and be a 30-something CrossFit phenom but in reality I just want to be healthy and strong. And after two years I’m not some bulked up SHE HULK. I’m still an average mid-30s woman. I don’t dedicate my life to working out because I have too much other shit going on. I don’t live at the BOX but I’m pretty sure I would if I could. The Community at our Box has only grown. We moved into a new and bigger facility. We form bonds and friendships at the BOOM Box. We support each other through and through.

After last night’s workout which included fear, stress and lack of want to, I realized that no matter what I’m going to finish the workout. Sometimes my strategy is more relatable to a mouse up against a bear, but sometimes I’m the lion in the field of lions. I had to work on rope climbs… scares the crap out of me. Like seriously. Why do I want to climb a rope that’s not even that high although it seems like a mile up there? I don’t but it’s all part of conquering fears and becoming stronger physically and mentally. Then we went onto 10 rounds of Rowing for 250m and 5 Overhead Squats. It sounds eh. But it was HOLY CRAPOLA. I scaled to 65lbs for the OHS and it’s a good thing because after about round 3, my legs were not a great source of stability. Strangely though I felt better rounds 4-9. Then went back to wonky for the last round. OH WHY AM I NOT A GOOD ROWER?!? But I finished as I always do – sometimes first, sometimes last … but I’m not quitting! Time 19:52

And for those of you wanting to be pretty and cute, well there’s that as a bonus from the hard work and clean eating, but I’ve taken away so much more. I leaned out quite a bit but never to where I “thought” I wanted to be physically. The way magazines and TV idolize super skinny women. I realized really quickly that’s not so important anymore. While I don’t like my current state of fluff – I’m not as hateful to myself as I once was in the past. I know my strengths. I know my weaknesses. I know I can lift heavy shit and I know I will get back to a good place. I’m sure a lot of women can relate at the discomfort that comes with body image. The scale was OHHH so important to me for entirely too long. Weighing day in and day out. Counting calories. Stressing over foods and how many calories I’ve burned. With CrossFit I’ve learned to let go. Two years later I’m still a work in progress. But meeting goals and doing things I have never done trumps the extra jiggle or dimples I have. I’ve learned to love me, still learning as I have setbacks every now and then but I don’t cringe at my imperfections. It’s what makes me … well ME! 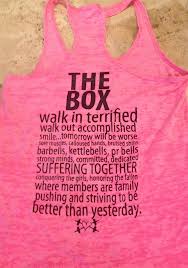 CrossFit is more than getting your daily exercise in. It’s learning to have a mental force to push you through anything. It’s pushing your body past it’s limits. It’s forging friendships with like minded people. It’s family.

So if you’re scared of giving it a go. DON’T BE! If you’re afraid you’ll become a sheMAN or the HULK if you’re a dude. Don’t be! If you’re afraid you’ll get injured. Don’t Be! If you want to be strong, empowered, fit and part of a great community then just TRY CrossFit out. There are boxes popping up everywhere. Most let you check them out for FREE to see if it’s something you want to do. Don’t feel obligated to go to just one and stick with that one. If there are several try them all out. And what you put in is what you get out. Hopefully you find a great Coach that will push you and not let you slip through the cracks.