It’s true I have PVD: POST VACATION DEPRESSION. I have no will to do much of anything other than go through the boring routine known as my life! How’s that for dramatic?!? Hahahah. I seriously just wish I could have stayed on Maui. But reality is I can not. Now I just gotta get out of my funk and move on. Over a week and no blogging it’s kind of bittersweet. I have a lot of workouts to report on, not one good bit of clean eating and I could recap vacation but don’t want to bore y’all with too much. As always I write off the cuff, no planning or outlines so who knows what you’ll get today!

Maui Recap
I did manage to get an ALOHA in on two Sundays ago and pretty much we were non stop the whole time. Ernie and I were good little workers and hit up Lahaina CrossFit a total of 5 times! It was 1 Rep Max week for them and out of 4 different movements on our last day I PR’d on Push Press! 100lb PUSH PRESS!!! So stoked to hit triple digits.

Doing some CASH OUT Tire Flips at Lahaina CrossFit!

As for the rest of the time, we went ocean rafting with Ocean Riders. We took a ride around the island of Lanai which is about 8 miles from Maui. Total distance around Lanai is about 68 miles. It took up the whole day and we hit up 3 snorkel spots. This was cool for us because we hit up snorkel spots we had never seen before. I only managed to see a sea turtle, some eels and of course lots of fish. One family saw a 3-4ft gray reef shark; Ernie and Jonas saw a lobster; Jonas saw sting rays and we all saw a variety of eels as well. If you’ve never rafted on the ocean it’s something you should do. It’s fun, crazy, and gets your heart pumping. 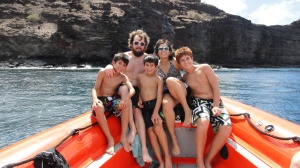 Family Pic during a peaceful part of the trip on Ocean Riders!

We also did a zipline tour at Piiholo Zipline. I really thought I’d be more “scared” of dangling over hundreds of feet but I wasn’t. It was beautiful and really fun. I had imagined a more adrenaline pumped adventure but instead of it was just very cool and laid back.

We also hit up a few beaches with some good surf where the kids did body surfing and boogy board surfing as well. I attempted to body surf and after getting beat up those 2 times that I “caught” a wave I was out! This mama does not find getting beat up very fun! The kids though had a blast. I opted to hang out past the break and enjoyed the show! The water was beautiful at all our spots. Chilly at first but perfect once you acclimated. 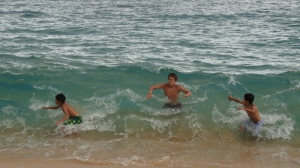 If you’ve been to Maui then you know about the Road to Hana. We weren’t going to go because it’s a long, sometimes terrifying but beautiful drive but the kids remembered the natural pools and wanted to go swimming in them again. It was rainy the whole trip and we get to the pools only to find out that they are closed to swimming! WTH?!? Guess we should have done our homework. It’s a fabulous scenic drive none the less but we did have some scary moments and were rather disappointed that the pools were closed! 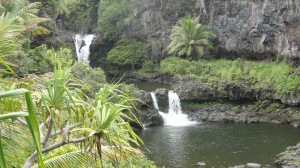 The beautiful pools that we COULD NOT swim in this year 😦

One of our only “chill” moments was the Luau we attended. I had not been to a luau since I was a kid so it was fun to see the excitement in everyone else’s faces. I forgot that luau’s can be fun and the fire dancing at the end was phenomenal!

Everyone’s favorite part of the Luau….well 2nd to the Fire Dancing!

Enough about my trip, I kept it short because I really could write a novel I think and I’m hoping highlights are better than dragging it out.

COMMUNITY BOOM WOD
We got home at 5 am this past Saturday and the crazy person that I am went to the BOOM BOX Community WOD and OLY class that follows. Yup I’m a little off my rocker. Boy did we do some work at the 9am WOD. It was guys vs. girls (teams of 5) and we did sled pulls and indian runs, wall ball leap frog something else I can’t recall and 500 KB swings! It ended up that it was tied 2-2 so the KB swings was the challenge to win. Turns out us ladies won! Go US!!

OLY Class
Right after Community WOD I have an OLY Class where we worked on Snatch Push Press and Overhead Squats (OHS). I suck at both but really put some effort out there and improved overall. Bonus is that I PR’d my OHS by 15lbs! I went from 75lb OHS to 90lb OHS! After my Push Press PR and my OHS PR I was feeling pretty good. I haven’t had much luck in that dept so it felt good knowing I’m improving.

After the workouts on Saturday I did nothing but sleep and eat poorly. This added to the week worth of vacation POOR eating, I knew I was in for it Monday Morning! And I was really in for it because it was 6 week test of CINDY! Six weeks ago I posted about weaksauce Cindy and that was after one weekend of bad eating, what will 9 days of bad eating get me?!?

Well I started off with the green band and completed 3 rounds of Pull Ups, by the fourth round Coach gave me a blue band to add to my green band. Pull Ups were much easier but I was still dragging ass! I completed 11 rounds + 5 pull ups (green band then green with blue). 6 weeks ago I completed 6 rounds +4 pullups (green band only). Although I managed more rounds I felt shorted because I ended up using more bands but ah well. 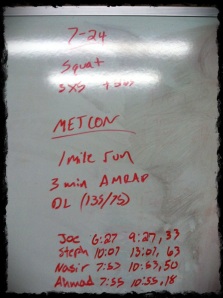 See I didn’t gibber jabber on too much. I was short and sweet and now about to be caught up for the week! This morning was one of those mornings that I knew I didn’t want to show up for at all. One mile run was part of the WOD and I didn’t want to do it. Sleep sounded so much better! Like a good little (well not so little) girl I unwillingly drug my butt up to the box. We worked on Back Squats adding 5lbs to our previous weight we worked on last. I’m up to 115lbs. 3 sets of 5 and although I could do the weight I always struggled on the last rep of each set! My IT band/knee bursae is/are so inflammed from eating poorly it’s sickening. It hurts so bad but I gotta push through. Been eating better for most of yesterday and all of today. It just takes time I know and I’m not going to beat myself up mentally over it. My body feels the effects just fine and it sucks!

MetCon: One Mile Run, then 3 minute AMRAP of Dead Lifts at 75lbs. So ya running, bleh! Slowest mile I’ve run in a very long time. 10:07! WTH. The guys are way faster and I was just left to my own devices of going SLOW! I didn’t even realize how slow my pace was until I got back inside. I had no time to cry about just do Dead Lifts. 75lbs isn’t so heavy so I knew I could get a good chunk in. I did 22 unbroken then broke down to sets of 10. All this poor eating has left me winded. I can’t breath. And I want to cry! In the end I completed 63 Dead Lifts. Here’s hoping that the rest of the whiteboard doesn’t blow me away. Well I know the run sucked but hopefully I made up for it in DLs!

So there ya have it. 9 day recap. Hopefully I told enough without you begging for more and in turn hopefully I didn’t bore the hell out of you. It’s Tuesday! SMILE! Maybe? Nah… I just want the ocean around me again and nice temps. Be awesome!

2 thoughts on “I’m here. Not willingly but I am here.”